About Our First Lady 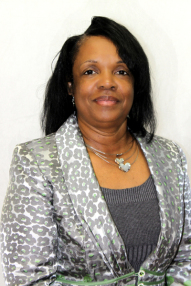 Lady Walterine Ricard has been placed in this congregation as a co-worker and co-laborer with her husband to achieve and complete the works of God for this ministry.

Her ministry in the congregation is continuously being manifested by God through the anointing He has placed on her life.

She, as Deborah in the Old Testament, has been given by God the ability to discern the mind and purpose of God and declares it to others.

God has anointed Lady Ricard to deliver his messages of love, salvation, encouragement, and deliverance.  As He used several great women in the Bible to proclaim His great works, He has used, and is using Lady Walterine Ricard to proclaim the name of Jesus and tell others of his life-saving grace.

God has anointed her as a master teacher who not only shares the knowledge of God, but who also practices this knowledge in her daily Christian walk. She teaches the women of the church to be sober, love their husbands and their children, to be discreet chaste keepers of their homes, and good and obedient to their husbands so that the Word of God be not blasphemed.

Lady Ricard is anointed to be a "Prayer Warrior."  One who is destined to win in the battle against Satan and his demons.  Like Saints of old, she prays until the bands of the enemy are broken.  She, like Hannah of the Bible, believes God and finds a refuge in prayer.  Also like Esther, she seeks divine guidance in times of difficulty.

Lady Ricard ministers through counseling and Christian guidance. Like Dorcas and Phoebe, she gives unselfishly of her time and talents to assist those in need.

In addition, Lady Ricard is a co-worker and serves as one with her husband in their service of the Lord.  Like Aquilla and Prescilla of the New Testament, they work as one in the Kingdom of God, for they have mutually agreed to put Christ first.

They are partners in faith and in their zeal for Christ and for His Church.  They faithfully endeavor not only to present Christ by life, but also in the excellence of their walk and in their conversations.  Lady Ricard and Bishop Ricard are a team and remain supportive of each other as they labor in the vineyard of the Lord.  They are one in love as well as in labor.

She exemplifies the characteristics of the virtuous woman in Proverbs in that she is a commendable wife and mother who cares for her home and family. In today's society, when the role of women in the ministry and in the home are being distorted and confused, Lady Ricard stands as a symbol, as a beacon of light for women of God to follow.

Get Social with Us